Acting to make the world a better place

The job of a charity is to make the world a better place. I have heard this said more than once and it got me thinking.

I have supported charities since my teens when I realised just how lucky I was to have a home. I have also worked for some, but I had never really thought of charities having such a big, almost impossible task.

My involvement in the arts sector is relatively new, and so I hope I may be forgiven for not knowing that many arts venues and organisations are charities. A good many do indeed call themselves charities, but are they really? Do they really make the world a better place? Or do they just provide entertainment for a select few? After all, all I do is to buy my ticket and attend a performance. What is charitable about that?

This matters for all sorts of reasons. All charities, these days, must be able to prove that the provide a public benefit. It is no good making a little bit of the world feel better for a regular audience. The role has to be much bigger.

So do they make the world better?

There is a good deal of research that suggests that by going to a live performance you do feel better. In early December, the Lincoln Cultural and Arts Partnership is running a seminar on Arts and Happiness to explore this assertion in a local practical context.

Art, music, theatre, poetry, literature all enable us to express feelings or concerns that are difficult to put in plain words. I was talking to a young woman who works with children to explore and overcome their difficulties through drama, and another who, through a spoken word competition, both improves the confidence of participants but also enables them to express what otherwise might stay worryingly inside. This surely is about making the world better. An example I came across a few years ago was about child protection. I didn’t truly grasp the issue until I had seen it portrayed in drama; it opened my eyes.

Organisations are challenged by government to reduce obesity, to cut the amount people drink, to eliminate smoking. Endless words can be written, schemes launched, but it might just be that the penny will only truly drop when the issue is presented imaginatively in drama or dance. I don't think this is so far fetched.

Art, though, is also much closer to home. It makes us happy. Wouldn’t it be wonderful if it were accessible to all?

This, I think is the point. An arts organisation benefits the public if it offers art that will appeal across a broad spectrum, that reaches out to people and groups for whom art is remote and at a price that is affordable to as many people as possible.

This article appeared in the Lincolnshire Echo on 3 December 2015 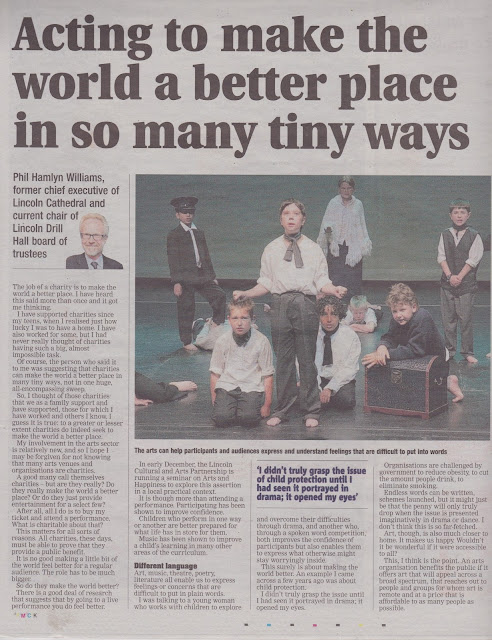