I am a huge fan of George Boole and totally agree that he should be celebrated in Lincoln.

Is public art the way to do it?

I am filled with admiration at the inventors of the tank and the Lincoln women who built them. I love the commemoration on Tritton Road.

Is public art though about more than this? This what I wrote for the Lincolnshire Echo.

Mention the words ‘public art’ in some circles and the groan will, if not audible, most emphatically be there. Why? Because we don’t understand it; there again, why should we? So, if not that then perhaps because some public art just doesn’t work. Is it the word ‘art’, yet again? I admit it, for years the very word ‘art’ was for me a ‘no entry’ sign. So, surely, ‘art’ in a public place, where I can’t escape it, must be a nightmare scenario.

I then began to ponder as I walked around our city. Public art at its most visible and permanent is of course architecture and, in Lincoln, we are blessed by great examples. I see from the new cathedral website that my favourite quote from John Ruskin, whom I am writing about at the moment, has been superseded:

I still like it, and, more importantly, the point remains that we do have a massive example of great public art. Yet it is art that speaks of the past. What of the present?

I was one who said that the Barons would never catch on. I thought that the idea of a bunch of medieval toffs was so far removed from how I read the legacy of Magna Carta. I was wrong. They worked, not perhaps because they were ‘great art’, whatever that is, but because they were playful and engaged people of all ages. It was wonderful to see them being painted, and, yes, there were some great designs beautifully executed.

Another piece of public art from last year was the sand sculpture in the castle. I went with grandchildren to see it taking shape. We knew all about sand castles and so wondered at the skill of the makers and the huge risk of creating something from such material: a little too sunny or a little too rainy and a shapeless pile would be the result. Why did it work? Because it spoke of a subject that echoed elsewhere in the city? Actually it really worked for me because the artist was being creative in a public place.

Is this what we mean by public art in Lincoln?

A few years ago some of us explored the possibility of having Henry Moore sculptures in various places around the city centre. For various reasons it didn’t happen then, but perhaps it could in future. Is that was we mean?

For me there are perhaps two or three key points, and this is very much a personal view.

One of the big problems is that public art is often there for too long; it was a good idea at the time. How often do we see a piece of art that has been neglected and has deteriorated because the  artist used the wrong material or because the commissioning body forgot that it would need to be maintained. Again a big plus point for the Barons was that they didn’t stay. The sand sculpture didn’t stay long enough. The poppies in the castle will probably be there for the right amount of time. A piece created for a long stay needs a great deal of care.

Public art must be in reach of us all. That means that it shouldn't be in a privileged place. The Barons were accessible; they were all round the city centre.

Public art in progress has a great potential to engage; so rather than a ‘thing’, an object, how about a space or spaces where things can be created? I would love it if the spaces were not just the ‘usual’ suspects: Cathedral, Castle, the Brayford and Cornhill. Why not St Giles, the Ermine or Birchwood? There is a precedent: St Giles has the wonderful 18th century church with it amazing story; the Ermine has Sam Scorer’s wonderful parabolic roofed church.

Art is not just an object; it can be performance. I love the immersive theatre I have experienced at the Drill Hall. Why not perform it in the open? Watch this space for this coming July.

These are my thoughts for what they are worth. If art is to be public we should all have our say. What do you think? 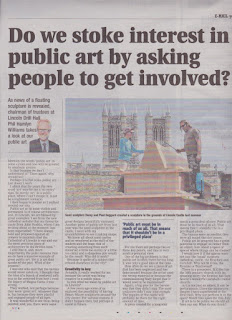 As published in the Lincolnshire Echo 24 March 2016