Apparently it IS our problem: our productivity is stagnant. The amount 'produced' by each worker is not growing and so there isn't the money to pay people more.

Hold on. As Ian Jack says in today's Guardian, only 10% of our economy is in manufacturing where workers produce things; the remainder is all about services, people doing things for other people.

I can understand productivity in manufacturing, where the use of machines can enable a worker to produce more. The Guardian Magazine article on robots helped me to understand the application of productivity to distribution centres.

Where I struggle is how productivity relates to the rest of the economy i.e. most of it. Let's take some examples.

Ian Jack talks of Baristas. Does increasing productivity mean that a machine will serve me my coffee?

There is much talk of the care sector. Are we to be looked after by machines, rather than people? The same might be said at the other end of life; are children in nurseries to be minded by machines? Of course not. Indeed if we are to improve the quality of care, we should have more rather than fewer carers.

The creative industries are said to be economically important. As a writer of non-fiction, I can vouch for productivity improved by using Google for research and my lap top for writing. But what of those whose work is what it is, because it is made by hand: Maggie's hand blown glass. What of musicians, what of actors and other who delight audiences? What of writers?

We can all see productivity savings in retail with DIY checkouts. As the Guardian leader says, one fifth of Amazon's employees are robots. I guess larger rubbish and recycling bins are examples of productivity.

Again, quoting the Guardian leader, millions of clerical jobs are now done by machines. This image from the Army Centre for Mechanisation at Chilwell in WW2, says a lot. 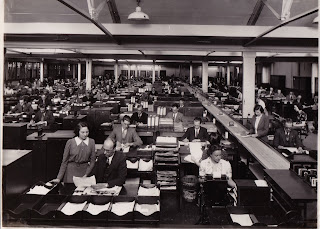 I would like to understand just what better productivity produces. Is it good for the many young people who now deliver parcels for their living? Another Guardian article by Sam Knight, on the billions of sandwiches we eat, highlighted the need for robot sandwich makers when we leave the EU since, apparently, the native British worker doesn't want to.

To my mind the question is bigger, and is much more about 'what is work on a post industrial society' and the related question of how the national cake should be shared out. Robert Peston touches on this and much more in his new book, WTF The question of a universal income needs to be explored. We are heading for a society of a mix of a small amount of high paid highly skilled work and low paid work that can't be done by robots.
Posted by PhilWriter at 11:31