Let's extend a warm welcome with tales of triumph over evil

When I try to look ahead to 2016, I am immediately struck by what seems a contradiction, opposite sides of the same coin. In Lincoln we will be celebrating the centenary of the engineering achievement of the tank. We will be also welcoming refugees from the war in Syria. There will be much more; each of us looks forward to or, sadly, dreads something that the new year will bring. I just want to dwell on the contrasts of the tank and the refugee.

I came across a story of the origins of the tank in the surprisingly good book by Boris Johnson, The Churchill Factor. This is very much Johnson’s personal view of the great war time leader. Churchill is without doubt Johnson’s hero, but not in all things; Churchill was after all a fallible human being. But the tank is a place where Johnson definitely sees Churchill as hero, compassionate hero. Unlike many of today’s politicians, many in both the first and second world wars had first hand experience of the horrors of fighting. Churchill had seen many thousands of young men go to their death as they went ‘over the top’ into a hail of machine guns bullets. Churchill observed that whilst mankind had invented a means of destruction, they had not yet provided an effective defence. What was needed was a shield, but one that could move over rough ground and so protect our boys. They needed a land ship, something out of HG Wells. Churchill, as First Lord of the Admiralty, knew the men who could do the job and so the idea was born. Others, more expert than I, can tell of how the idea evolved into the tanks manufactured on Tritton Road.

I have explored the further evolution of the tank during the second world war as part of my research for my forthcoming book, War on Wheels, on the mechanisation of the army. There is much that has struck me, but the strongest point is surely how destructive this means of defence became.

My son spent some time in Damascus a few years ago and told me of the incredible beauty and long history of Syria. Much, indeed most, of the physical history and great architecture of that ancient civilisation has now gone. The tank was but one weapon taking part in that destruction, far more so of innocent people than stone and mortar. Nonetheless it did destroy.

When the refugees arrive in Lincoln they will see the monument that has been created to remember those who invented and built the tank.

We can tell Mr Churchill’s story. We can emphasise the engineering skill and involvement of so many people in confronting a nation with cruel ambition. Perhaps more so in WW2 we can talk of how essentially the whole country joined in the struggle against evil.

None of this can replace what those refugees have lost.

So, what do we do? We can offer a warm welcome and do what we can to make their lives in Lincoln and Lincolnshire as good as we can. We can encourage our politicians in pursuing a comprehensive strategy to rid the world of the evil that is ISIS. To my mind this will have a strong emphasis on rebuilding a vibrant Syria, indeed a vibrant middle east and north Africa where a peaceful voice of Islam is clearly heard and drowns out the voice of violence.

Perhaps our celebration of the centenary of the Lincoln tank can be the cue for us to stand up and be counted. If 2016 has that in store, we’ll have done our duty of commemoration. 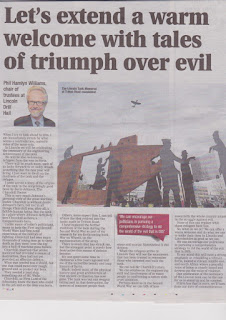