The Lincoln Book Festival emerged in the early summer from a long winter, paralleling the blossoming of soaring gothic architecture from the dark ages…possibly! It actually emerged from a period of hard work seeking out interesting books and more importantly interesting authors who enjoy talking about their work.

This year, the 800th anniversary of one of the pivotal battles in English history, demanded attention. Its date of 1217 would also have witnessed St Hugh’s gothic cathedral towering majestically over hundreds of small dark dwellings in the town. This contrast between light and dark begs a gothic theme.

For the battle, I spoke to David Starkey and he suggested a broader theme of battles and dynasties. The battle though speaks also of strong women and temped us toward a look at influential queens. The thirteenth century gothic of the cathedral invited a glimpse into the gothic revival architecture of the 19th century, Sir George Gilbert Scott and our own St Nicholas Newport. That gothic revival in turn beckoned us into 19th century and later ‘scary’ gothic literature. 19th century tempted us into the Pre-Raphaelites and painting back to the Mona Lisa.

When we revived the Lincoln Book Festival a few years ago, we debated long what its theme should be. We had to do little more than look out of the window of the room where we were meeting to see some of the city’s Roman remains. Over the road was the Gothic Cathedral and on through the Georgian Minster Yard was the Norman Castle.

Lincoln is a place where history seeps from every stone.

The city’s origins are owed to the Romans – whose ancient city can still be seen today – and ‘Lindum Colonia’ has played an influential role in English history ever since.

In 1215, an original of Magna Carta was brought to the city and today Lincoln Castle is the only place in the world where the great charter can be seen side-by-side with an original of the 1217 Charter of the Forest. This year with the added attraction of the Doomsday Book.

Thousands of years of history can still be seen in the fabric of the city, known as the ‘Birthplace of the Tank’ due to its engineering heritage from the early 20th century.

So, history chose itself. To be honest, so did gothic as this year’s theme.

Yet, for all our wonderful speakers, what I looked forward to most was reading the shortlisted pieces of our flash fiction competition. We invited people of all ages to write a piece of gothic fiction in just fifty words. At the first evening of the Festival we will hear the winners. I can’t wait.

Details of the Festival can be found on the website 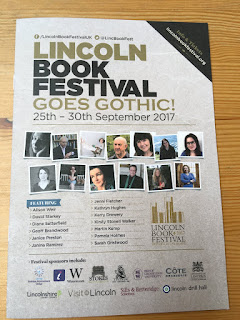 The Lincoln Book Festival is in many ways remarkable. Some years ago it was in effect run by the local authority and was really quite big. Then its funding vanished and a dedicated group of people fought to keep it alive. Many are still trustees and without them it simply wouldn’t be here.

Festivals need money, as indeed do charitable arts venues like the Drill Hall

In the early days of independence the Book Festival received vital support from the Lindum Group. Since then there have been a number of wonderful and loyal sponsors.