Who was this man, William Smith Williams, who discovered Charlotte Bronte

Charlotte Bronte described him as pale, mild, stooping man of about fifty.

We know, or can infer, that his schooling brought him into contact with boys, including Keats, who would go on to careers as significant thinkers and writers. We know that his social group included or was close to some of the most exciting thinking of his time: people such as Ruskin, Thackeray and Elizabeth Gaskell.

He grew up close to theatre land and both had a great love of theatre and a deep knowledge of it. He had a love of painting, Turner in particular; he wrote on the place of Art in Design. He worked for many years for a ground breaking Lithographer, Charles Hullmandel and he wrote on the techniques and impact of Lithography.

Yet, his emergence into the public view was from a position as a book keeper, and it would seem not a very good book keeper.

But who really was William Smith Williams?

The book I am researching sets out to trace whence he came and whither he went to paint a picture of this incredibly creative time in our history which included the groundbreaking shift in the English novel that was Jane Eyre. 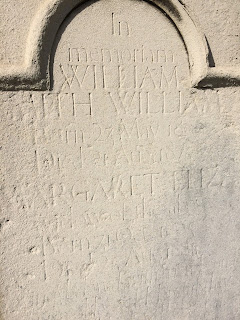 WSW's tomb in Kensal Green Cemetery
Posted by PhilWriter at 13:49