Perhaps there has always been a refugee crisis somewhere in the world; somewhere so bad that made people like you and me flee for our lives?

We see it with Burma, in the Yemen, but also in Europe. Not that that makes it any worse or indeed better. It is part of the natural order of civilisation; the more powerful oppress the less powerful, so much so sometimes that they have no choice but to up sticks and leave home behind.

They leave Syria and Afghanistan for the Greek Island of Lesvos even when they know both the danger of getting there in the first place and the hell that awaits. Some thought they were lucky to be able to move on to continental Europe until they arrived in Calais. It is simply no good politicians saying that better conditions would only encourage more to come. As if people would actually decide to stay in a war zone? Men, women and child will always flee for their lives if they have too. Civilised nations must always be prepared to offer safety.

The news today out of Lesvos is so horrific. It is of the camp where Maggie and I worked nearly two years ago now. We thought it was bad then; it was nothing in comparison to now. it just gets worse and worse.

Civilised and wealthy nations simply have to man up to stop this inhuman treatment; it could after all so easily be any one of us next time.

We must never allow our leaders to forget. The new film Human Flow should help. 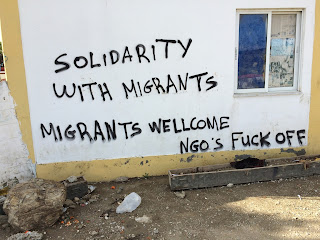