'A great people invited all civilised nations to a festival to bring into comparison the works of human skill.' So wrote Sir Henry Cole one of the exhibition's organisers.

On 1 May 1851, Queen Victoria opened the exhibition in Hyde Park to crowds eager to see this display of British invention. It was held in a building made of steel and 30,000 panes of hand blown glass. Inside were machines, exhibits from all around the country, the Empire and wider world.

The catalogue to the Great Exhibition, copies of which are in many libraries, is also available online. This reveals many connections, for example with the Stokes Mortar, which was invented by the managing director of the Ipswich engineers, Ransomes, who had exhibited the equipment they were making for the railway companies. For Lincoln dwellers there is an entry for Clayton, Shuttleworth & Co with an oscillating steam-engine but with ‘arrangements simple and compact, suitable for working corn mills, sawing machinery etc

My great grandfather was secretary to the committee of Surgical Instrument makers and he managed the business of J Weiss Co at 62, The Strand. He was presented with a catalogue, the cover of which has been preserved. 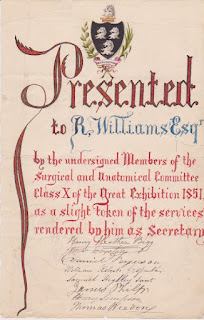 Thumbing through the catalogue, it is interesting to see the names that have survived to this day: Heal & Sons no longer make furniture, but still sell it, Fox Brothers still produce wool textiles, and famously Siemens but the British arm of the family. Winsor & Newton are still active in supplying the arts community as are Rowney now as part of Daler-Rowney.

Most of the thousands of companies exhibiting at the Crystal Palace in Hyde Park that summer of 1851 thrived and either died or combined as British manufacturing reached and passed its zenith.

That year was also marked by the first comprehensive census which offers an idea of how the nation was employed. Textiles Agriculture came top with some two million people; textiles came second at over a million. Domestic service loomed large but so did coal mining and metal working. It was a nation at work.

You can buy How Britain Shaped the Manufacturing World at Pen & Sword, on Amazon and at WH Smith.