Manchester mills were transporting tons of cotton goods to the port of Liverpool by canal, built by the Duke of Bridgewater, but which took some thirty-six hours and which was expensive. What was needed was a steam railway.

George Stephenson planned the rail route to Liverpool, which included sixty-four bridges and viaducts along thirty-five miles of track. It was, though, more likely that his son, Robert, designed and built his “Rocket”, ‘by the happy combination of the multitubular boiler and the steamblast, Mr Robert Stephenson succeeded in producing an engine far superior to any previously built in point of speed and efficiency.’ Heavy rails were laid at considerable cost and, with heavier locomotives, ‘the superiority of the railway system to every other mode of conveyance was placed beyond question’. By 1850, the line was carrying two million tons of cotton a year. It also carried passengers to ships leaving Liverpool for the new world with emigrants seeking a new life, in place of their previous cargo of slaves. It was the first twin track line in the world that carried paying passengers and so may rightly lay claim to be the birthplace of modern passenger railways.

Fifty years later damage was being caused to Manchester’s cotton trade by the cost of rail transport and Liverpool dock fees. The answer was to dig a new thirty-five mile long canal from Manchester to the sea. The traditional method of digging, by the employment of many thousand navvies, was simply not viable and so an alternative had to be found and it was, in the shape of Ruston & Proctor of Lincoln. Joseph Ruston had, in 1885, delivered a paper to the Institution of Mechanical Engineers in Lincoln on his steam navvy, described as being something between a traction engine and a crane. He had impressed, for the Manchester Canal Company engaged seventy-one of these massive machines. He impressed even more when the many machines, buried by flood water in 1890, were soon in full working and returned to work successfully to complete the canal.

You can find more of the story of How Britain Shaped the Manufacturing World in my book of the same name available from publishers, Pen & Sword 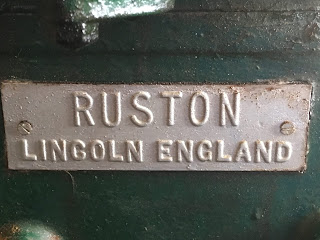