“I am passionate about British manufacturing.”

These were the words I heard myself uttering in a shoe shop as I declined to buy a shoe made in India at half the price of one made in Northampton. They were both handmade by wonderful craftsmen; quite possibly the craftsman in Northampton was of Indian extraction. I found myself muttering something about the carbon footprint of the Indian made shoe.

I walked away from the shop unable to make up my mind, which instead wandered to a graph I had been studying and which depicted the rise and fall of manufacturing employment in this country (fig 2a if you follow this link to the ONS paper). The peak of 30% was in the 1960s, reducing to something like 8% in 2016. (The graph includes in secondary employment both manufacturing and construction, the latter being fairly constant at 8-10%)

What was I seeking to resurrect? Some golden age of manufacturing? The fifties and the sixties are referred to by some as The Golden Age.

Surely not the cotton mills of Victorian times? What about the early steel works? More probably railway workshops or my great grandfather’s surgical instruments business. This thinking led smoothly to Rolls-Royce and hand-built Merlin engines for Spitfires, to handcrafted Humbers whose doors 'opened and closed like the case of a good watch'. But then what about ICI and the plants making Perspex for Spitfire cockpits? This led me via the later wartime production line manufacture of aero engines to the factories in postwar Coventry.

I remember visiting the dark, noisy Avon Rubber factory in Melksham in the 1970s, and running the gauntlet of rows of women workers in Nottinghamshire textile factories. But then those fading photos of factories at clocking off time and the neighbouring streets flooded with cloth capped figures on bicycles?

What am I longing for?

First a reality check. Mechanisation has eliminated many repetitive tasks but also the associated employment. The employment that remains is ever more skilled and fulfilling.

The moving of labour intensive manufacturing to countries with lower labour costs once seemed attractive. The drawbacks of lack of responsiveness but, more so, the environmental cost surely brings this practice into question. The production of untold tons of cheap cotton or man-made-fibre garments is simply adding to the environmental bill, as are the containers full of cheap plastic toys eating up sea miles en route from China.

Is my nostalgia turning green?

I do jar when I read a list of air source heating manufacturers and fail to find any made in Britain (I have since unearthed Dimplex but also Kensa who focus on ground source). On the other hand I thrill when my son tells me about British manufacturers of electric and hydrogen powered buses (Dennis , Arrival and Wrightbus. When I visit the Rolls-Royce website, I delight in the story they tell of wonderful engineering that is happening now. I am warmed by anecdotes of companies like JCB who applied their machinery and skills to produce equipment to help the NHS fight COVID. I am warmed by JCB generally as I see yellow tractors and diggers on neighbouring farms, as well as in heavy construction.

On social media there are great champions of British manufacturing and the story they tell is positive and I am thinking of FactoryNOW and The Manufacturer.

We will not return to manufacturing making up one third of the workforce, but it will continue to contribute significantly to the country's output. Not least with the input of universities such as Lincoln. The whole issue of employment in the 21st century was explored at a symposium with the University. 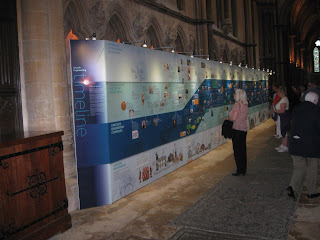