Battery Technology - some of its history

The battery was famously invented by Volta and had many uses, not least in valve radio. It was perhaps not wonderfully convenient, requiring regular charging at a shop which often would double up as the bicycle repair shop.

With the explosion in the number of motor vehicles used by the British army in WW2, batteries for lorries and tanks were in great demand. Oldham was one British company which rose to the challenge.

Oldham's traditional business was hats, and from this had come mining lamps, and, from these, batteries. The depression in coal mining had encouraged a shift towards supplying batteries to the more buoyant motor industry, so Oldham had been well prepared when war came.

The car battery to us in the 21st century is enclosed, reliable and clean. In the middle of the twentieth century, even though technology had made great strides forward, the battery, with its elements suspended in acid, was far from simple. The Centre for Army Mechanisation at Chilwell has a store specifically set aside to keep batteries charged. 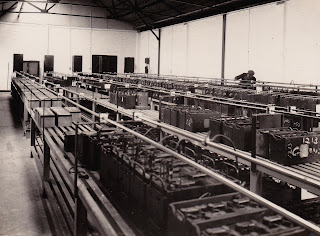 In the run up to D Day, Vehicle Reserve Depots were set up including one at Donnington Park motor racing circuit not far from Chilwell. Vehicles were received, checked and parked. Batteries were removed and stored together in large sheds where they were all kept on charge using diesel generators and topped up with fluid by their ATS carers. In order to minimise movement, a truck fitted with an air pump was taken round the parked vehicles to keep the tyres at the correct pressure. Radiators were drained.

The plan for vehicle supply for D Day included categories of spare parts. Batteries were seen as likely to be in need of frequent replacement and so were among the immediate category of spare. A key issue in the early part of 1944 was that batteries were in short supply and great numbers were needed from the USA as spares. Controller of Ordnance Services, Bill Williams, travelled to the USA in April 1944 to encourage the production of spares of all kinds, but including batteries. depot addressed a problem of missing parts that boiled down to a misunderstanding with the parts list. A final visit to the Electric Storage Battery Company found a solution to the shortage of spare batteries.

Another important manufacturer of batteries was Chloride whose UK factory was in Manchester.