How Britain Shaped the Manufacturing World - my approach

I had, through my earlier writing, discovered that my great grandfather had exhibited at the Great Exhibition of 1851, and so I found a copy of the catalogue and began to thumb through. They were there, some of the businesses I had come across in my research into army supply in the world wars. I also found many others whose names rang bells from my childhood. Those names sent me on voyages of discovery.

I read many books, including David Cannadine’s Victorious Century which gave me the context. I devoured Eric Hobsbawm, Age of Revolution which offered a radical view of the industrial revolution. I had studied urbanisation as part of my BA, and so turned to Jerry White for his books on London in the eighteenth and nineteenth centuries. It soon became clear that trade was at the heart of the birth of British manufacturing and so I turned to Anthony Slaven’s, British Shipbuilding 1500-2010 and Peter Moore’s, The Endeavour. From there it was on to the more familiar coal and iron with Robert Galloway’s, A History of Coal Mining in Great Britain, Eric Hopkins’s, The Rise of the Manufacturing Town Birmingham and the Industrial Revolution and Roger Osborne’s, Iron, Steam & Money; I had studied the role of Birmingham also as part of my BA. Hobsbawm had directed me to textiles, and so I read The Lancashire Cotton Industry – A History since 1700, edited by Mary Rose, and Robert Poole’s, Peterloo – the English Uprising.

This brought me to individual British companies. I am massively grateful to Grace’s Guide’s wonderful online resource, but also to company’s websites and to writers of articles for their painstaking exploration of subject areas. I read authors who have devoted themselves to securing for posterity the stories of the companies they explored:, Bernard Newman’s, One Hundred Years of Good Company on Ruston & Hornsby, J.D. Scott, Siemens Brothers 1858-1958 and also his Vickers: A History, Demaus. and Tarring’s, The Humber Story 1868-1932, Geoff Carverhill, Rootes Story: The Making of a Global Automotive Empire, Carol Kennedy’s ICI The Company that Changed our Lives, and Alan Towsin’s books on a number of commercial vehicle manufacturers. Books on industries: Aileen Fyfe, Steam-Powered Knowledge, George I Brown, The Big Bang: A History of Explosives, Alex Askaroff’s, A Brief History of the Sewing Machine, William Manners’s, Revolution: How the Bicycle Reinvented Modern Britain, Steven Parissien’s, The Life of the Automobile, A New History of the Motor Car, Peter Dancy’s, British Aircraft Manufacturers since 1909, Graham Turner’s, The Car Makers, Keith Geddes and Gordon Bussey’s, Setmakers – A History of the Radio and Television Industry. Books on people and families: Henrietta Heald’s William Armstrong, Magician of the North, Marion Miller’s, Cawnpore to Cromar: The MacRoberts of Douneside, and Andrews and Brunner’s, The Life of Lord Nuffield – A Study in Enterprise and Benevolence. The Complete Great British Railway Journeys by Charlie Bunce and Karen Farrington provided a vivid verbal map which helped me navigate a sometimes crowded landscape.

I carried out my own research into Census returns and published industrial statistics; I had explored industry in the interwar years as part of my BA. My earlier work on supplies in the two world wars proved of enduring value: War on Wheels on the mechanisation of the British Army in the Second World War, Ordnance on Equipping the Army for the Great War and Dunkirk to D Day which looked at the lives of some of the leaders of the Royal Army Ordnance Corps to whose lot this massive task fell. 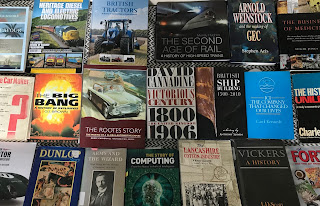 How Britain Shaped the Manufacturing World is available to pre-order from Pen & Sword.